Hyundai has launched a bargain-priced crossover to market, loaded with safety and style – Hyundai Venue.

I don’t review or write for Hyundai – the journo list seems to be way too long to get on, so I’m happy to share information from other sources whenever I can.
Autoweek.com is a US-based online publication which gets very early access to a lot of brands that we’ll eventually get in Australia.

As a Car Broker based in Queensland, I’m also asked my opinion on the various brands and models that are on the market or are due soon.
So rather than say ‘nothing to see here’, I’ll post the article on my site, give credit to the source and also the journalist who’s written the story. That’s what I did recently with the release of the Ferrari F8.

And for this launch, Ben Stewart was flown by Hyundai to … Australia. The launch was conducted on the Sunshine Coast in Queensland recently, so Ben’s opinion of the Hyundai Venue is for Australian spec vehicles. How good is that? So sit back, relax and review the review by autoweek.com on the Hyundai Venue, but remember this review is based on US spec models and pricing.
Hyundai Venue starts at $19,990 ($23416 Drive Away in Queensland) in Australia.

Subcompact crossovers are trending. And it’s not just because they’re cheap. These tiny cars wear fashionable bodies, pack plenty of safety tech and offer more practicality than subcompact cars because of their tall hatchback design. These may be some of America’s least expensive vehicles, but they’re also the ones frugal buyers really want to own.

According to Automotive News, the subcompact crossover segment, which claimed less than 0.5 percent of the U.S. car market back in 2010, now represents 4.5 percent. In real numbers, today that’s around 16 nameplates comprising almost 800,000 in sales. AN says that’s a full 12 percent of all crossovers. Those are not small numbers.

But is there room below the bottom of the current market? Hyundai confidently says yes. The company claims that one-third of used car buyers last year actually shopped for a new car. And they want some of these folks to slide right into a new Hyundai—the all-new budget-priced Venue. Hyundai already has the successful Kona playing in this field. And that model has seen a whopping 100 percent growth in sales over the last year. But when the even smaller Venue arrives in December, it will notch below the Kona as the least expensive crossover in the company’s lineup. Even before it arrives on our shores, the Hyundai Venue is no stranger to success. It has been on sale in India since May and is already the best-selling SUV in that country, according to Hyundai.

The 2020 Hyundai Venue premiered at the New York auto show.

The Kona and Venue both use Hyundai’s K2 architecture. But the Venue is based on a smaller version shared with the Hyundai Accent; that means the Venue is exclusively front-wheel drive. Engineers really focused on body rigidity for the Venue. And to accomplish that goal they adopted 46 percent advanced high-strength steel and used another 16 percent high-strength steel in the structure. Upfront you’ll find a familiar strut-type front suspension, with a torsion beam handling things at the rear.

Take a tape measure to both the Kona and Venue and it’s clear which one’s the tyke. The Venue’s tiny 99.2-inch wheelbase is 3.2 inches shorter than that of the Kona. It’s also 5.1 inches shorter overall and narrower by just over an inch. Yet the Venue is actually a little taller, which helps it recover some interior volume. In fact, there are 18.7 cubic feet of cargo volume behind the back seat and 31.9 cubic feet with that seat folded. But the neatest trick for cargo loading is the simple slot built into the back of the rear seat to store the cargo cover. Smart.

Buyers will be able to choose between three trims: SE, SEL or Denim. But there’s only one engine here—Hyundai’s 1.6-litre four-cylinder with dual-port fuel injection and continuously variable valve timing. It’s the same powerplant the company uses in the Accent, and Hyundai says it should generate 121 hp and 113 lb-ft of torque. That may not sound like much but in its lightest trim, the Venue only has to move 2,300 pounds. That’s several hundred pounds lighter than many subcompact crossovers. And unlike most new vehicles, the Venue is available with a manual transmission. Yay! However it only comes on the base SE models. 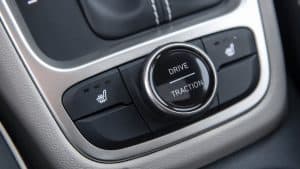 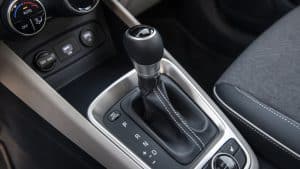 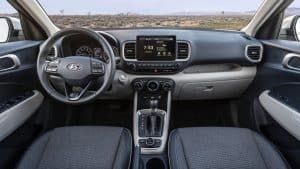 Boo! Every other trim will hitch that four-cylinder to a continuously variable transmission, aka CVT. Although the EPA has yet to test the Venue, Hyundai predicts it will return 32 mpg combined.
Since the Venue is only front-wheel drive, the company has given this trucklet a two-mode traction control system. There is a normal mode and another for snow or low-traction situations. The Venue’s traction and stability control systems can vector torque across either axle by using the brakes to improve handling.

There’s also a choice of sport, eco and normal drive modes on upper trim models, which will alter the sharpness of the throttle as well as transmission behaviour.
Hyundai is proud of the suite of safety features offered on the new Venue. The base SE models come standard with forward collision-avoidance assistance with pedestrian, lane keep assist and driver attention warning. But if you want the optional blind-spot warning and rear cross-traffic collision warning, they are only available on the more expensive SEL model. Go further into the options list and a Premium Package includes heated front seats and mirrors, as well as LED lights and more.

We’re sitting behind the wheel of the new Hyundai Venue, but that wheel is on the right side of the car—not the left. And that’s because we’re driving Australian-spec Venues here on Australia’s beautiful and rugged Sunshine Coast in Queensland. Since approximately 50 percent of Australia’s roads are comprised of dirt or gravel, this should be an excellent test.

So how exactly are the Aussie-spec models different from the ones we’ll get? Hyundai says that although the springs and anti-roll bars are identical to US cars, the dampers are firmer for the Australian roads. And instead of a CVT, the Australians get a six-speed automatic joining their manual transmission. Unfortunately, Hyundai didn’t have any manual Venues with the 15-inch wheels on hand for our test drive. The Venue may be one of Hyundai’s least expensive models but the driving experience actually delivers quite a lot of fun. Push the Venue hard into a set of tight switchbacks as we did and it really hangs on thanks to those 205/55R-17 summer tires. The grip is excellent and there’s almost no perceptible body roll either. The steering is quick and accurate but unfortunately (and predictably) feels a little digital. The four-wheel disc brakes (11-inchers up front and 10.3 in the rear) easily slow the Hyundai. These are the same size as the standard brakes on the heavier Kona—so no wonder they work well. Base SE models trim some cost from the chassis and use 8-inch drums on the rear axle.

Toggle the mode selector to sport and the Venue holds onto gears longer and will downshift a gear when you’re diving into a corner. It’s quite responsive. And so is the 1.6-litre engine. On these roads, the Venue felt just as zippy as anything in the class. Perhaps more so. But driven hard with the throttle floored, the little four-cylinder does get a little loud. Will our U.S.-spec CVT models be as fun to drive as the six-speed automatic? Our hunch is—perhaps not. But we’d guess the athletic personality of the chassis should remain.

That Aussie-tuned suspension is great when the road bends but it can be a bit firm when the road gets rough. And we spent plenty of time kicking up huge plumes of dust on the gravel and dirt roads. On this terrain, we were glad to have the Venue’s 6.7 inches of ground clearance—and we never once bottomed out the suspension, even on large dips taken at speed. That might be one reason why the Australians use a stiffer suspension. Even in those relentless conditions, the structure of the Venue felt tight, with not a quake or quiver that we could detect. The visibility is excellent, too, which helped us scan the terrain for wildlife. Apparently kangaroos like to cross these remote roads single-file as a group. Thankfully we didn’t spot any ‘roos. But we did get very comfy riding in these Venues. The seats are supportive, and there’s plenty of shoulder room up front for two big blokes. The tilting and telescoping column made it easy to find a proper driving position. Generally, the Venue doesn’t feel like one of the least expensive cars in Hyundai’s lineup. The switchgear is robust, and we dig that 8-inch infotainment screen that comes loaded with Apple CarPlay and Android Auto. Perhaps the only improvement we’d make would be to add some door armrest padding for elbows.

Climb into the rear seat and there are 34.3 inches of rear-seat legroom. With that front seat positioned for our 5-foot-11 frame, we had to sit in the backseat with our knees splayed a bit. No matter, almost 39 inches of headroom back there and a good rake to the seatback—we weren’t uncomfortable.

Take a stroll around the outside of the Venue and it’s clear—the chunky cute-ute styling really works. It looks cool, especially with the available trendy white roof. But here’s the problem: You need to get the Denim model (basically a blue fully loaded SEL) to have the option of that two-tone roof.
The Venue is a well-equipped, entry-level machine, and we dig its frisky personality. Hopefully, the CVT and softer dampers won’t dull the enjoyment. Regardless, if the Venue ends up thousands of dollars cheaper than the competition, it will be an excellent value. And for many shoppers in this segment, that’s what matters most.