The colloquial term we call bush, encompasses grasslands, scrub, saplings and dense forests. Most of the bush is located on the seaboard of our continent. So what’s the Firestorm Rage Remission in Australia all about.

Easily seen from this satellite image, it’s the green parts that have been the problem these last few months, rather than the arid centre.

We’ve had a few years of increasingly hotter summers and even hot springs. (No, not that type of Spring, the season of Spring) Australians are arguably used to fires in Summer (December to March) but not with the ferocity we’ve experienced in late 2019 and so far in 2020.

Just this last week, we’ve had relief in the form of summer rains – and rains are something we’ve been waiting for since about July 2019. It’s been the driest year (2019) on record according to some and it ‘must be about climate change’.

Is climate change real? It appears to be, but the activists and scientists can’t really come up with an equitable solution. And not only the activists such as Extinction Rebellion and the very vocal teenager Greta Thunberg can tell us what to do other than “You’re Killing the Plant”. “Stop Killing Us!”

As things go, the houses and properties that have been devastated in these fires can be replaced. While insurance companies aren’t that happy, the claims will reach well over $1,000,000,000 (billion). And that doesn’t encompass the businesses that have been destroyed nor livestock.

The Australian Government has stepped up with emergency relief payments and reconstruction payments of over 2 billion dollars so far and has suggested that there isn’t a cap on the amount they’ll expend. Just ‘whatever is necessary’ said our Prime Minister, Scott Morrison

Over 1 million hectares of bush has been devastated – it’s suggested that over half a billion of Australia’s native wildlife has died. Over 2000 homes and businesses have been destroyed, and 27 people have died as a result of the bush fires.

How did they start?

Swinburne University professor and director of the Centre for Forensic Behavioural Science, James Ogloff, said recently that around 50% of bushfires were lit by firebugs and that fire season gets them excited, saying: ‘They’re interested in seeing fire, interested in setting fire and quite often the information around how fires burn and accelerate excites them.’

As to lightning, summer is our storm season and lightning is part and parcel of summer storms. But we really can’t deal with arsonists/firebugs. The cost to the community is way too large.

So if we consider arsonists and natural occurrences of lightning are the norm, what role do other factors play?

In many National Parks around our country, the access gates have been closed to all save walkers. No longer are fire services able to get access to clear the national parks of excessive litter – leaves and limbs – as much as they have done in the past. Should Green activists accept some responsibility?

The activists pictured are typical of this part of our society that doesn’t condone planned burns in national parks. I wonder what they now have to say about half a billion animals being burned to death because of the lack of reduction on the forest floors.

One of the more serious concerns with apathy in this segment is that there’s been a green infiltration of our states and as importantly local government bodies.

Federally that isn’t as much of a problem since the current coalition government was elected with a majority in the lower house. However the mandate isn’t working its way through our upper house – the senate. These are the men and women charged with the responsibility of being the watchdog – overseeing the decisions made in the lower house.

And unfortunately, with the major opposition, the Australian Labor Party siding with the Greens, the way forward with this matter is difficult. Much the same as in the USA with a Democrats dominant lower house and a Republican Senate. 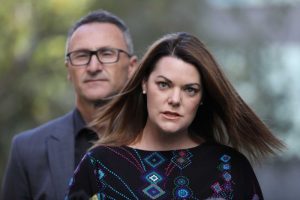 I saw Greens Senator Sarah Hanson-Young on Fox News recently arguing that the fires were ALL about climate change and that while the Federal Government continues on with their present policy that nothing different would happen. That Australia’s bush fire crisis this year would be worse in years to come.

Hanson Young seems to be suggesting that Australia’s 1.3% contribution to Global Emissions is responsible for the bush fires. One question that I’d put to the climate alarmists such as Hanson-Young is this:

If you had the ability and governance, what would you do to prevent climate change?

In Australia, we have a workforce of over 300,000 people in the resources sector and a majority of those people work in the coal industry. If mining were to be stopped today, what do you suggest that these people do?

The coal industry is a worldwide concern. To effectively stop climate change there would need to be an immediate stop to the mining and use of coal as a power source. How do you do that without affecting the incomes of people and countries as well as their lifestyle? Would the cessation of coal mining lead to an intercontinental war?

And let’s also throw oil into that equation. Coupled with the closure of the coal mining industry, let’s eliminate oil production worldwide. What would cessation of the oil industry look like?

In my opinion, a reduction in global temperatures can’t be fixed in a few short years – 2030 or even 2050. There are certainly alternatives to coal and oil, but the technology is young and needs more input.

The replacement of coal and oil needs to be a world-wide plan accepted by all major contributing countries. The top 10 polluters (see chart below) would need to sort this out between them

Looking at the geopolitical relationship between these countries doesn’t give me much hope.

Australia is Open for Business

Despite travel warnings being issued by many foreign governments, including for a time, the USA, Australia is open for business as far as tourism is concerned. Since the fires started their devastation, incoming tourism numbers have fallen by around 40%. The Federal Government has committed $76 million dollars to immediately restart the International Australian Tourism marketing campaign and encourage overseas visitors back to our shores.

Fire isn’t the true story. The areas under fire are not in the main cities of Australia – Brisbane, Sydney, Melbourne, Adelaide, Hobart, Perth and Darwin. These cities as well as the Far North around Cairns and the Red Centre, have been fire-free and are well and truly ready to welcome tourists from all over the world.

From an Australian perspective, I feel great sadness for the loss of lives, property, wildlife, business and confidence in our country.

Governments of all levels, charitable groups, and importantly those volunteer firefighters who have contributed so much are to be lauded. Thank you.

In the haunting words of the late and great poet Dorothea Mackellar (1885-1968), the third paragraph suggests an understanding.

Core of my heart, my country!
Land of the rainbow gold,
For flood and fire and famine
She pays us back threefold.
Over the thirsty paddocks,
Watch, after many days,
The filmy veil of greenness
That thickens as we gaze …