I was at Albert Park this last week, the site of the 2017 Australian Grand Prix. And no, I wasn’t doing circuits of the track, nor was I there to see Daniel Ricciardo.  What I was doing was attending the annual luncheon for the Australian Road Safety Foundation.

If you’ve read any of my blogs or seen me on LinkedIn you’ll know that I’m an advocate for the Foundation. Every connection from LinkedIn and every car that I sell creates a donation to the Australian Road Safety Foundation.  It’s my way of giving back to the community that has made me successful over the last 39 years

Russell White is the founder and CEO of the ARSF. Russell kicked it off in 2007 as the umbrella for his other not for profit – Fatality Free Friday. Whilst FFF is the ‘look at me’ day – this year on May 26th, the foundation was created to provide support. Caltex is the founding sponsor of the foundation and has been joined over time by the likes of Bob Jane T Marts, Suncorp Insurance, “Licensys” , 2017 Formula 1 Rolex Australian Grand Prix, NSW Government, Victorian Government, Queensland Government, Personalized Plates Queensland, TAC, as well as supporting partners, Driver Safety Australia and Quill 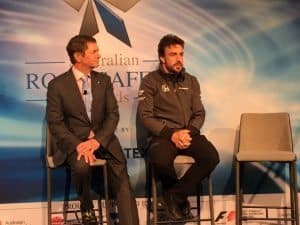 Russell kicked it off with the sole purpose of educating drivers and reducing the national road toll. Have a look at these startling statistics

Since we started keeping road death records in 1925, more than 189,000 people have died on Australian roads. Is that more than died in all wars or conflicts that Australia has participated in? Annually, and on top of the human cost, the economic cost is estimated to be more than a staggering 27 billion dollars – $27,000,000,000. And compare this to the Australian Defence Budget of $31.9 billion for 2015-16.  And yes, I understand that the Federal Government needs to maintain the security of our great country, to keep it safe from foreign threats but surely a greater investment in our own population is warranted. Consider the last productivity of those 189,000 people. Consider the anguish of the family when a life is lost. I think the Federal Government needs to reconsider the investment in road safety.

One point that I’d like to make here is that ARSF doesn’t receive ANY federal Government support and whilst it’s a not-for-profit organization, the Feds won’t recognize a tax deductible status. Seriously?! About time that they did don’t you think? The only way to achieve something substantial for this organization is for a politician to take the lead and drive a result.

If you have the time, look up your local members email address here (Senators and Members) and send them an email asking for the tax status of the Foundation to be reviewed. You might have to dig a bit into their page but you’ll find their email address for sure. Please feel free to use some or all of this article – add your own opinion but let’s shake the trees and get some sort of result.

Special guests at the annual awards luncheon were Formula 1 Dual World Champion, Fernando Alonso and local Supercar legend Craig Lowndes. Both spoke of the investment in road safety through their motorsport careers. Alonso, in particular, the driver in the spectacular crash at the 2016 Formula 1 Grand Prix, insisted that modern technology had saved his life in that incident. 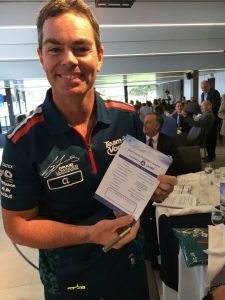 Lowndes spoke about distraction whilst driving – his family have made a pact to glovebox mobile phones when they’re in the car. Great move Craig.

If you’d like to know more about the Australian Road Safety Foundation, click on the link. If you’re able to make a donation, no matter how small or large, you’ll be helping the ARSF to reduce the road toll on Australian roads