I first became really aware of Suzuki in 2000, when my business partner and I purchased Redcliffe and Suzuki.

Beforehand, the name Suzuki was known to me as a motorcycle brand and some light off road vehicles rather than a manufacturer of light passenger vehicles.

I sold my interest in the Suzuki brand in 2012 and retained some others. But my appreciation for the Japanese company didn’t diminish. I’ve always believed that Suzuki was one of the better kept secrets in the Australian automotive car park.

After selling my franchise interests in 2015, I’ve played around the edges of the new car business as a buyer’s agent, and as a blogger, writing stories about my experience with cars, and commenting on various industry topics.

Recently, I had a thought to get into motoring journalism and the first company I approached to get on their list was Suzuki Queensland. Many of my ‘old’ acquaintances are still involved, Stephen Craig, Mike Turner, Paul Dillon and Greg Hines, so it was great to see them when I picked up the Suzuki Ignis, the subject of this article. 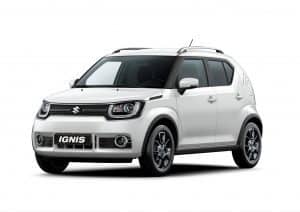 When I decided to write articles and reviews on cars, I thought I’d write them from car dealer and customer perspective rather than a car reviewer. Many are the times when journalists comment on speed (0-100km/h times) the articulation of a car through a high speed corner or other aspects of a car that the average person just doesn’t get to experience, use or find important enough. I do like to know, seating capacity, safety aspects and fuel economy. So let’s look at the Suzuki Ignis GLX auto from this perspective

The Suzuki Ignis GLX is a comfortable 4 seater. Note 4 not 5 – there are 2 seat belts in the back of this model, but the base GL has room and seatbelts for 3 in the back. As far as front leg room, there’s plenty. I’m 182cm and 100kg and found the driver’s seat very comfortable. Given my seating position, the rear seat leg room is better than adequate. I did bump my head on the roof the first time I got in the back (my bad), but the leg room, shoulder room and head room were pretty good. Don’t know that I’d want to be sitting there on a long road trip, I found the rear seat lacking in squab comfort but no problem for a quick trip up or down the coast or around my local community of Redcliffe.

From the drivers and front seat passenger’s perspective, the seating is comfortable, with plenty of room all around.

Remember the Suzuki Ignis is a compact urban SUV, so don’t expect too much load carrying capacity. In fact it seems to me that rear seat room has caused a compromise in the load area. If you’re choosing this for mum and a young child, whilst the child seat fits in nicely, you couldn’t put a pram or stroller in the load area without dropping one of the rear seats.

When I first jumped in the Ignis, everything seemed familiar yet very modern. Controls fell to hand nicely, the Apple tablet sized infotainment system has everything that you’d need – navigation, smartphone Integration, and most media which you’d ever want.

Here’s an important point. When you buy an Ignis, make sure that, upon delivery, you make sure that the salesperson gives you a thorough explanation of this system. You could read the owner’s manual, but it’s better if you are ‘trained’ on the complexities of this modern motor car.

Push button start is the standard nowadays, but the key fob has to be pressed to open the Ignis. Auto down driver’s window is nice, but auto up doesn’t exist. In my opinion for the modest sum of this feature, Suzuki needs to add it.

The air conditioning operates well and has a great temperature range. The air system, coupled with the size of the car enables everyone to keep their cool so to speak. No hotspots in the back of the car and that’s great. Probably the only thing I’m going to criticize is the fuel economy indicator on the right had side of the steering wheel. It’s almost useless if you’re trying to drive economically. Suzuki san, best change that to a digital readout showing actual fuel consumption in numbers rather than a digital slider that doesn’t help.

Both GL and GLX are powered by Suzuki’s 1.2-litre ‘Dualjet’ four-cylinder naturally aspirated petrol engine developing 66kW/120Nm. Those buying on a cars kilowatt rating might think this is underpowered before learning the manual variant tips the scales at just 820kg, while the CVT adds an additional 45kg to 865kg

This Ignis has a 1.2 litre engine coupled to a CVT automatic transmission in the car I’m driving. Standard transmission is a 5 speed manual and the auto is an extra $1000. If you don’t like the idea of changing gears, then the auto is good. The gear changes are pretty smooth. Some motoring journalists don’t like CVT transmissions, but in my opinion, buyers won’t mind it at all.

Ignis has plenty of zip around town, but the engine seems to be slightly noisy on the highway. Not that it would worry most, it’s the trade off for good fuel economy.  Ignis leads comfortably against Mitsubishi ASX and Holden Trax as far as fuel economy is concerned, being over 36% better on fuel than the Holden and a stunning 55% better than the Mitsubishi ASX.

As far as annual fuel consumption is concerned, Suzuki Ignis scores top marks with $846 compared to $1104 and $1353 for the Mitsubishi and Holden respectfully.  I’ve taken these numbers from the www.greenvehicleguide.com.au comparison site. And another thing, the Suzuki Ignis and Mitsubishi use 91 RON fuel (regular unleaded) whereas the Holden Trax requires the more expensive 95 Ron (premium unleaded) fuel. All can run on E10 fuel though.

All score well with ANCAP safety ratings with 5 stars and all are Euro 5 compliant with air pollution standards. The Suzuki is way out in front from the CO2 fuel lifecycle with 128 g/klm compared to 186 g/klm and 193 g/klm for the other two.

I’m driving a Jeep Grand Cherokee as my personal car. It’s a big lump of a wagon where the proximity warnings go off like a fire alarm. The Ignis, on the other hand was a whole lot less inconvenient to park in my local, very busy, shopping centre. Making sure that it was in the middle of the car park space, there was plenty of room on both sides to open the doors. Made exit and re-entry a breeze.

One other feature of the Suzuki Ignis is its higher ground clearance. It makes avoiding the car park concrete parking stops so much easier than in a normal height hatch. Even climbing over kerbs was a breeze. No scratches on this little car that’s for sure.

One thing that wasn’t as pleasant was the ‘bumps’ going over speed bumps in the car park. The suspension is a little bit stiffer than I was expecting but the Ignis ‘drove’ over them without any real unpleasantness.

Standard safety equipment includes six air bags including curtain air bags for all passengers as well as thorax bags for front row occupants. As we’d expect in such a modern car, the car is standard with EBD, ABS and a handy hill-hold assist

A lot of journo’s poo poo the idea of a space saver and I’m not sure really why.

I’m not expecting to drive hundreds of kilometres on it, just to the tyre place on the next day to have it sorted. I’d rather have more cabin room than a full size spare. And another thing, I’d rather save $100 or so with a space saver than paying it on top of the car price.

Ignis GLX gets the auto as standard and costs $19990 drive away before argy bargy with the dealer. Don’t be too hard on them, my insider tells me that the margin they do have has been squeezed a bit to keep it under $20k drive away

On top of this price, you get the opportunity to customize your car with some clip on colourful accessories. My test car had some red highlights fitted to mirrors, wheels, fog lights and interior – a really customizable little car that impressed me no end.

Would I buy a Suzuki Ignis GLX? If I had a need for a compact SUV, it would certainly be on the shopping list. If I was looking for a car for a son or daughter, I’d probably buy this car than any of the other contenders. Comparisons with the aforementioned Mitsubishi and Holden are strong points, particularly as concerns economy and whole of life costs. Ignis is back and it looks good. 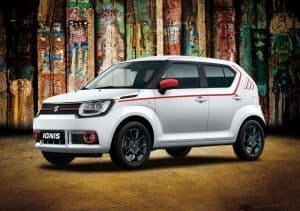 I’m a fan. If you’re looking for a compact car that has great interior room, good ground clearance, is brilliant on fuel and fun to drive, then Suzuki Ignis should be short listed on your shopping list.